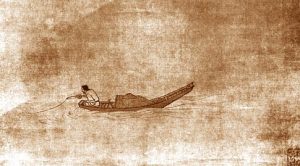 Painting of China, flourishing in the era of the Middle Ages – IV – XIX centuries of our era, it was not by chance that it took an honorable place in the world history of art. In this area of ​​artistic culture, Chinese masters managed to leave a particularly bright mark. With extraordinary conviction, they embodied the beauty of nature, the ideas of harmony and majesty of the universe. They invested in the picture-scrolls not only personal moods, but also wisdom understandable to subsequent generations.

The charm of old Chinese painting is in the depth of poetic insight into the life of nature. This art narrates about the change of seasons, gives the viewer the opportunity to look into the world of forest thickets, introduces him to the eternal secrets of the earth. Here you can find something consonant with our time. Paintings by painters Wang Wei, Xu Daoning, Guo Xi, made more than 9–12 centuries ago, make us and now experience emotional excitement.

Any ancient art, giving joy from its contemplation, requires aesthetic experience and preparedness. Created in remote times, it carried through ancient ages, symbolic representations. The form of Chinese paintings, devoid of frame, composition, methods of performance are unusual for Europeans, who have long since become popular with the technique of oil painting. In the color harmony of things, in a wave-like rhythmic structure, of deliberate incompleteness, in the repetition of plots, the viewer feels a hidden meaning that he cannot immediately guess. Painting turns out to be both simple and complex, requiring to get used to its images.

The most characteristic feature of medieval Chinese art is the desire to comprehend, through the particular universal laws of the world, to see phenomena in their interconnection. In the Chinese picture, the detail deserved the attention of the master only insofar as it allowed to understand the universal. Thus, the plum blossom branch gave birth to images of spring in the imagination. A buffalo, wandering heavily on a snow-covered plain, personified winter. And a lonely bird, chafing on a bare branch, is an autumn homelessness. While closely observing nature, the artist at the same time never worked directly from nature. He created a kind of artistic designs based on certain elements of the image.

Their basis was the unusual appearance of the work. The Chinese picture-scroll, usually executed on silk or paper, is unlike the European picture. It is rather a pictorial poem or novel, read like a manuscript. Already in the early Middle Ages, two main forms of scrolls took shape. Vertical – when the scroll was unfolded and hung on the wall, and horizontal – when it unfolded in hand as it looked. Vertical images usually did not exceed three meters, and horizontal ones, which united a series of landscapes, genre scenes, and urban views, sometimes reached several tens of meters. Each of the two forms of scrolls made it possible for craftsmen to depict the world in all its diversity. Patiently deploying a horizontal roll in his hands, the viewer seemed to be reading through a long book of travels — cities, palaces, temples, camel caravans, mountain passes and valleys stood in front of him. In the wall scrolls, on the contrary, revealed the entire breadth of the universe. They expressed a deep philosophical meaning.

Household art originated in China long before the appearance of other genres. She illustrated legends and novels, was long-term, narrative. In the same place where human emotions and poetic moods were touched, the image was invariably intertwined with the landscape. The world outlook of medieval China can be called a landscape – so the existence of people was realized in connection with nature.

She has been the subject of close observation since ancient times. In contrast to the countries of Europe, where man was the measure of all things, here it was the natural principle. Therefore, the landscape has won a leading position in art. Pantheistic world view as it directed all types and genres in a single direction. Deep kinship linked, for example, painting and architecture of medieval China. Like the landscape painter, architects perceived palaces and temples as an integral part of the natural ensemble. They built them in the most picturesque places of the country, and the roads to them were laid in such a way that before the traveler opened various types. The need to contemplate beauty was associated with the construction of landscape gardens, pavilions and arbors, as if lost in the mountains. The ancient architects, as well as masters of the landscape, possessed the unique skill of using natural spaces as a picturesque background in ensembles of gardens and parks.