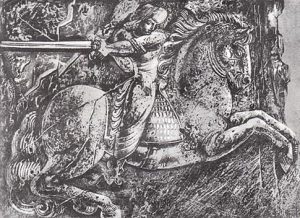 Anyone who has visited Yerevan at least once will remember for a long time the sculptural monument to David of Sassun, made by the USSR People’s Artist Yervand Kochar. A little more than twenty years ago, this monument was created, but it is no longer possible to imagine an ancient city, the same age as Rome and Babylon, without a mighty horseman riding a powerful horse.

There is no person in Armenia who would not know about the feats of David of Sasun. This is the hero of the national epic – the legendary personality. But the basis of the image, of course, are real events. After all, the uprising of the inhabitants of the mountainous region of Sasun against the tribute collectors of the Arab caliph served as a pretext for creating the epic. The epos tells about a quick-tempered young man of extraordinary power. David could not commensurate it and in children’s games, he continually wounded his comrades. Growing up, he turned his strength to protect the weak and offended. His main achievement is the liberation of his native land from the invaders and the victory over their leader Mera Melik. It was a match of equal rivals. However, on the side of David was justice, and this determined the winner.

Knowing that the fight will not be easy, David takes with him the heroic weapon of his ancestors – the sword-lightning and tames the powerful sea horse Jalali, who in a jump could reach the sun. And the decisive moment of the fight. He reared up Jalali and rushed at the enemy. The horse’s mane was swept away by the wind, and David’s cloak was thrown back. And he angrily moved his eyebrows and, rising to the stirrups, raised his sword lightning for a crushing blow … That was how David Sasunsky was seen by Yervand Kochar.

A man of versatile talent – a talented painter, graphic artist, sculptor, he created his first significant works in Tiflis at the beginning of this century. Then he lived and worked in Paris. In love with the art of the old masters, at the same time he was looking for new ways of expressing a complex contemporary reality. These searches led him to create works where painting and sculpture exist in inseparable unity. They brought him fame.

But neither a resounding success, nor Parisian fame could not keep the artist away from their homeland: in 1936, Yervand Kochar arrives in Yerevan – an ancient and at the same time young, city under construction.

The experience and knowledge of the artist, enriched by new contact with the national history and culture, determined the appearance of an important topic in the master’s work. At that time, Armenia was preparing for the celebration of the Millennium of David of Sasun, and Kochar makes illustrations for one of the publications.

The artist sees the heroes of the epic weightily, materially, volumetrically and, breaking the usual ideas about the book graphics, draws old stones with reliefs depicting episodes of an ancient legend in gouache. Yes, it is a fantasy, but firmly connected with the national tradition, because temples and stones were decorated with stone carvings from old times in Armenia.

The epic nature of the story forced the artist to abandon the pronounced movement in the compositions. Even the scene of the duel between David and Mer Melik, due to the fact that the figure of the young man is depicted in the center of a balanced composition, evokes a feeling of stately calm. All this shows how talented Yervand Kochar embodied his understanding of the epos and traditions of Armenian stone-cutters. According to one researcher, he “executed the illustrations in such a way that, probably, the people would have created if he wished to seal his story in stone”.

Almost two decades later, the artist again addresses this topic and creates a remarkable monument to David of Sasun. Just as over the years, freeing from uncharacteristic details, becoming a symbol of courage and justice, the image of David of Sasunsky in the epic itself gradually took shape, so in the work of the master the image of the miracle hero finally matured.

Looking at the illustrations of Kochar, we constantly remember that the events they are talking about happened a long time ago. The text of the epic, printed side by side, and the illustrations, stylized as antique, remind us of this. Another thing – a monument in a crowded square. Here the sculptor makes us like witnesses and even accomplices of what is happening, infecting the energy and feelings of his hero.

From the sound of an overturned horse to the sound of the sword to be lowered, the master captured the blink of an instant. But, bypassing the sculpture, we see how subtly it changes: the horse’s leap goes into a long flight, and the moment turns into eternity. As in the epic, a specific event takes on a lasting importance.

If in the book the illustrations and the text supplement and explain each other, then the sculptural monument is obliged to “speak” itself. Even to a person who is unfamiliar with the text of “David of Sasunsky,” it should be clear that in front of him is a hero who raised his sword against the enemies of his people, and his victory is certain.