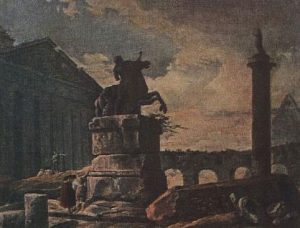 Antique ruins, then reflected in the calm waters, then almost hidden by thickets of climbing plants, shrubs. Peaceful rural nature, almost always clear sky. Through the gaps of trees make their way out the dying rays of the sun. Soft play of close colors, remarkable skill in depicting architecture, human figures, in the transfer of the finest natural states. Such is the collective image of painting by the French artist Hubert Robert.

He was born in Paris in 1733. Nineteen year old boys began to attend the workshop of the sculptor Slodtts, who instilled in him a love of antiquity. Three years later, Robert came to Rome as a supernumerary retiree at the French Academy and began working under the direction of Panini, one of the leading masters of the architectural landscape in Italy. But he especially attentively listened to the advice of the outstanding master D. –B. Piranesi, who worked in Rome. It was under his influence that the young artist gradually formed as a “painter of ruins”.

“Rome, even when destroyed, teaches,” he wrote in one of the drawings. Adoration of antiquity Robert expressed in the film “Artists”. Among the debris of giant columns, statues, two figures of painters sketching ruins are hardly distinguishable. It is interesting to note that they are depicted with portrait features of Robert and Piranesi himself. Here the main theme of the artist’s creativity was expressed: antiquity in connection with modernity. No wonder Robert was struck by the contrasts of Rome, the combination of magnificent ruins with the modern life of the city. The cabbage market, surrounded by an antique column, cows grazing on the Forum, workers carrying an antique statue that had just been removed from the ground. These everyday scenes attracted his close attention.

With every thing he gains the strength of his hand. In the composition of the “Villa Madama under Rome” of the 1760s, the painter resorts to a bold reception: the entire front is occupied by a wall, gradually lowering from right to left. The author directs the perception of the viewer, forcing him to “read” the picture in that order. And in the left corner of the canvas, the ruins of the palace illuminated by the setting rays of the sun grow, gradually disappearing into the greening more often giant pines. Due to this technique, the composition acquires tension, dynamics. The art of the master is not alien to convention. So, in the name of artistic truth, he expands the arches of the wall to give it even greater squat. Conversely, pulls up the openings of palace buildings, to emphasize their grandeur.

In Italy, Robert begins writing in the open air for the first time. He enthusiastically sketches villas, parks, urban buildings, villagers’ houses. Once at the villa Mattei, immersed in the work, he accidentally avoided the danger of being crushed by a collapsed wall. Robert made a huge number of drawings in Italy, mostly sanguine. Later on, he drew themes from these albums for large canvases. Interestingly, these graphic works are not just fixation of what they see. In them – the “grain” of future paintings.

In 1765, the term of Robert’s retirement ended. In Paris, he returned a recognized artist. He is awarded the title of academician. This gave the right to participate in the so-called Salons-exhibitions, which were held in the Louvre.

In the “Salon of 1767” survey, philosopher-encyclopaedist and art critic Denis Diderot wrote: “Robert is a young artist who exhibits his paintings for the first time. He returned from Italy, from where he brought the lightness of the brush and a kind of color. He exhibited many things, among which there are excellent … “The critic has devoted over thirty pages of enthusiastic review to the analysis of his works. So, for example, about the painting “The Big Gallery Illuminated from the Deep”, he wrote: “O beautiful and majestic ruins! What is the hardness and at the same time, what ease, confidence, ease of brush! What effect! What greatness! What a nobility! Let them tell me who owns these ruins so that I can kidnap them: this is the only way to acquire available to the poor. ”

From now on, every performance of Robert in the Salons was accompanied by the same success. This triumph was not simply the result of recognition of his talent. In many ways, it was explained by the current situation in France. In the 60s of the XVIII century, the Rococo style, far from life, began to lose popularity. A period of fascination with antiquity began, leading to a new flowering of classicism. A great role in this was played by the works of the famous theorist and connoisseur of ancient art I. Winckelmann, the resounding success of archaeological excavations in Rome, Pompeii. The works of Robert responded to the interest of society “to the classical ruins.” For example, in the Salon of 1769, he exhibited 15 paintings at once.