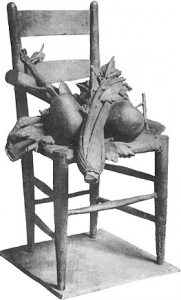 Creativity Mantsu is a surprisingly natural synthesis of truth, clarity of artistic ideas and originality of the visual image. His method is truly realistic, but this is realism, say, not of the 19th century, but of this century, including philosophical generalization and everyday narration, the elusively tender poetry of feelings and the visible objectivity of forms.

It is significant that everyone studying the art of Manzu sees in it and singles out for himself something special, the most exciting. In his work there are so many different facets that it equally strongly attracts even artists of opposite directions.

The famous German sculptor Fritz Kremer wrote: “Giacomo Manzu is one of the greatest talents in the art of sculpture today. In his works there is nothing purely intellectualistic and theorizing. Phenomenal naivety is, in my opinion, the main feature of his creations. ”

D. Manzu – a native of the North Italian large family, the twelfth son of a shoemaker from Bergamo. He received no consistent vocational education. From childhood, he worked as an apprentice with a woodcarver, with a gilder, and at intervals studied decorative modeling at an evening school of applied art. And yet, despite the lack of systemic training, Mantzu became an outstanding sculptor thanks to the undoubted talent, tremendous effort to art, the desire to reach perfection through searching and mistakes, patient study of the classics and mastering the basics of the craft, skills in working with the material. Every Italian has models of classical art in front of his eyes – museums, cathedrals, architecture, monumental painting, sculpture. Obviously, Manzu was particularly receptive and sensitive to the beauty of the national artistic heritage. It is not by chance that critics associate his work with the traditions of antiquity and the Renaissance.

Having gained valuable practical experience as an artisan in the workshops of marble workers, carvers, decorators, Mantzu did not cease to study the classics. He made copies of ancient sculptures, got acquainted with Greek art, showed a greedy interest in the work of Donatello. Having been in Paris for the first time in 1929, he became interested in modern painting and sculpture, and carefully looked into Rodin’s marbles. In his work, a culture of feeling, creative experience and social activity gradually merged …

Renato Guttuso said very figuratively and precisely about the social role of creativity of his friend and soul mate: “Manzu’s creativity is connected with the life of thousands of threads. For example, in the days when he was awarded a prize, Rome experienced mournful hours of anger and humiliation: an innocent boy was killed. You are ashamed to be a man when a creature similar to you, even if only biologically, commits criminal and inhuman acts … We mourn a pure boy, a victim of insane cruelty. We read newspapers and mentally see stones, bundles of iron rods and leather gloves, equipped with iron nails. The thought involuntarily arises: these are the very same nails that Mantzu placed on the helmets of the soldiers who crucified, the same stones that Mantzu put in the hands of St. Stephen’s murderers – eternal signs of murder and dull intolerance of reason, of good.

Referring to the story of the murder of St. Stephen, Guttuso has in mind one of the main works of the sculptor, which is called “The Doors of Death” and was created for an architectural monument.

“Doors of Death” are two large reliefs and eight stamps, that is, smaller images intended for St. Peter’s Cathedral. Decorating the bronze doors with the largest monuments of art of the Vatican with reliefs, the creation of which was attended by masters of the XV – XVII centuries, was an extremely important and difficult task. Working on the order for 18 years, Manz came close to the level of skill and greatness of the plan of famous predecessors. His “Doors” is an example of creative boldness, civil passion. The artist put into the work a rejection of violence, ardently affirming the uniqueness of human life.

A realist sculptor with a heightened sense of objectivity, Mantzu fills traditional symbolism of religious subjects with lively sound. His “Death of Abel”, “Violent Death”, “Death of St. Stephen” are inspired by humanistic ideas, anxiety and bitterness of a person who is revolting against fascism, against terrorism – today’s barbaric violence against a person.

Had to hear a statement about impressionism Manzu. Yes, the manner of his modeling is sometimes gentle and picturesque. But at the base of most of the works there is a lively, sharp form, a striving for compositional integrity, a broad philosophical generalization.