James Whistler: “I am an artist and“ born ”in Petersburg” 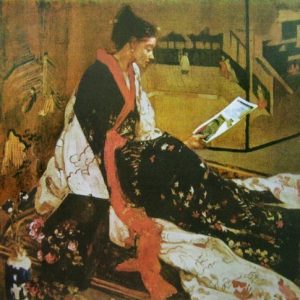 James Whistler, an Anglo-American artist, was born July 11, 1834 in Lowell, the industrial city of the United States. Staying in Russia largely affected the formation of his talent. Whistler arrived in St. Petersburg as a teenager in the fall of 1843, when his father, a railway engineer, was invited by the tsarist government to build a railway that was supposed to connect the two capitals.

The years of childhood and adolescence, spent by the future artist in Russia, are the most cloudless and bright years in his full shocks of life. North Palmyra appeared before him in the splendor of its palaces, the brilliance of military parades, the lights of fireworks illuminating the evening sky of the capital with myriads of falling stars. The house where Whistlers lived was located near the grandiose architectural ensembles of the city. The impressionable boy gave himself up with passion. Snowy Russian winter – skating on the ice of the Neva. In the summer – traveling by boat, walking with his mother in Tsarskoe Selo and Peterhof, where Jimmy was enraptured by the Grand Cascade and the statue of Samson. Whistler early addicted to drawing. A. Koritsky, a free student of the Academy of Arts, began giving lessons to the boy. In 1845, thanks to the training received, Jimmy Whistler was accepted immediately into the second class of the Academy and proceeded to drawings from gypsum. The academy of those years is called “Brullov’s”. Koritsky, with whom Whistler continued his studies, was one of Bryullov’s close students. Posted on a vacation in London, James writes to his father that he is going to watch Rafael’s cartoons: “I wish you could come with me! And Koritsky, too, how we would enjoy. ” At age 14, he firmly chooses the path of the artist.

But in April 1849, the father suddenly died. A mother with children and her husband’s coffin are returning to their homeland, to America … The end comes to systematic study of art. Paying tribute to family traditions, Whistler studies for three years at the West Point Military Academy, then works as a draftsman at the Geodesic Department, where he masters the etching technique necessary for making maps.

In the fall of 1855, James Whistler, with the consent of his relatives, left for Paris to become a professional artist. He leaves America forever, only many years later his works will travel across the ocean to take their rightful place in museums.

In Paris, Whistler attends the workshop of S. Gleire, a supporter of academism. He was respected by students, among whom in the 1960s there were prominent impressionists O. Renoir, C. Monet, A. Sisley. A fellow practitioner of Whistler, D. Dumore, described Gleire’s workshop in Trilby’s novel and portrayed James as a lazy apprentice, the “king of vagrants” to whom everything was forgiven for his charm. However, the “sloth” always found time in the Louvre on the works of Rembrandt, Velasquez, Hals to learn the noble restraint of color, close attention to the living person. This dandy was able to appreciate the realistic pathos of the paintings of Gustave Courbet, and their impact on the young artist was extremely beneficial.

Already in 1858, Whistler publishes his first “Twelve Etchings from Nature”, made in Paris, London and the Rhine, in which the lessons of Rembrandt are clearly felt. The etchings immediately gained popularity, and their author appeared as an established master of artistic engraving, which experienced a period of deep decline in those years.

Whistler-etching techniques were peculiar and demanded increased sharpness of the eyes and hardness of the hand. Usually he painted directly from nature on small copper plates, working in the “dry needle” technique, which allows him to achieve special juiciness and elegance of colorful lines.

In London in the years 1859-1860 Whistler creates a series of etchings “Thames”, where he seeks to reflect the poetry of labor. Especially successful etching “Pier of the Black Lion.” In the painting “Wapping” he solves the same theme in painting.

Cloth “At the piano” in 1859 was approved by Courbet. It depicts people close to Whistler – Sister Deborah and her daughter Annie. The theme of the home “musical concert”, often found in Dutch painting, the artist decides in his own way, combining it with the theme of motherhood. The picture is written in a restrained color. Integrity is achieved by a finely felt gradation of light and shadow, by the harmony of slightly muffled contrasts, both tonal and color (black and white, dark red and light green). The composition is built almost according to the classical canons: the figures of the mother and daughter, bowed to the piano, fit into a triangle, the top of which extends beyond the edge of the canvas. The repetitions of the horizontal lines of the floor, the body of the piano, and the frames on the wall create a second, more subtle rhythm.