Leah Grundig – the art of anger and struggle 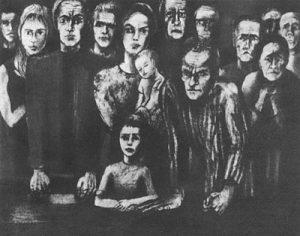 Expressive ink drawings, expressive genre compositions and portraits made with black chalk, aggressive engravings based on the confrontation of light and shadow … figures of the unemployed, touching images of proletarian children and women, exhausted by fear and need. Other sheets show working demonstrations and meetings, heated debates and discussions. The German artist Lea Grundig was vividly and accurately embodied in the plight of the workers and the ripening feeling of protest in their ranks during the dark days of the fascist nightmare.

The art of Leah Grundig gains strength and independence simultaneously with the civil maturing of German workers, their awareness of the need to fight against the power of capital and the threat of fascism. Germany began our century – a country actively advocating for their rights of the proletariat. In the 1920s, a strong Communist Party was formed here, which became the attractive center for progressive representatives of German art, mainly for those artists who firmly associate their work with the working class. These artists are united in organizations under the advanced slogans of time. Such creative groups as the November Group, later the Red Group, an art workshop under the Central Committee of the Communist Party of Germany, are formed.

The Association of Revolutionary Artists of Germany becomes a real fighting headquarters. Its branches, except for Berlin, open in other cities. The most active group of the association works in Dresden, which includes Lea Grundig. Its activity – party, creative, organizational, propaganda – in the highest degree meets the task proclaimed by the association: “… serve the revolutionary movement not only with its creativity, but also with the full contribution of the whole person.”

The artist gave herself entirely to the ardent struggle – the facts of her biography and creative life speak about it. Even in her early youth, Leah decided to become an artist. But her father was a wealthy bourgeois and insisted on enrolling her daughter in a commercial school. Secretly from her father, the girl went to study at the Dresden Academy of Arts, virtually breaking with her family and bourgeois environment for good. Her student and advisor, later known anti-fascist artist Hans Grundig, also became her advisor and friend, and later her husband and associate. Together with him, Lea takes part in the class battles of the 20s, joins the Communist Party. Spouses live in the proletarian district of Dresden, on their own experience feeling the plight of people left without work during the economic crisis. When they receive a beggarly allowance, they draw a lot, paint, share bread and care with the poor, who willingly pose for young artists, trust them with their sorrows. “Our life,” Hans Grundig wrote in those years, “was directed by the party: we worked for her, sparing no effort, on many fronts of art and propaganda.”

Indeed, artists designed campaign performances and participated in them themselves, organized working holidays and exhibitions, created engravings on topical issues, painted political cartoons for factory newspapers. And even when the party press was banned, and the Communists began to persecute, Leah and Hans, together with their comrades, took out large letters on the walls of houses: “Down with the fascists! Vote for PPC »

The coming to power of Hitler and the beginning of the brown terror kept communist artists under the eternal danger of arrest. More than once, Gestapo officers came to them with a search. Gansu and Lea are strictly forbidden to engage in artistic activities and exhibit their works. But they were ready to work underground and continued the struggle. In the 30s, the artist creates her best anti-fascist series: “From the Life of Women”, “Under the Swastika”, “Threat of War”. Her graphic style becomes more expressive, tonal contrasts – more sharp. The atmosphere of horror is gathering, anxiety and pain are growing.

Often, Lea Grundig turns to the images of children and women in order to more firmly mark the destructiveness of the regime for the most defenseless and fragile lives. As Lea’s husband recalled, her works “had one peculiarity: they always reflected social problems. Drawing boys or girls, she not only conveyed all their childish charm, but also told about the difficult existence of these children. ” The sheets “Proletarian girl”, “Mothers”, “Children play war”, “Boy at the window”, “Mother with child”, “Woman with a baby carriage” reflect the downtroddenness, bitterness, despair of people who are inherently peaceful – women and children.