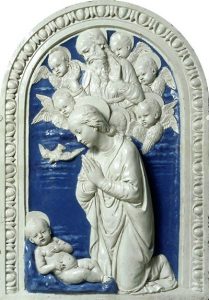 The whole long life of Luke della Robbia was dedicated to serving the arts. The sculptor was born in Florence in 1399 or 1400. He made many works that rightfully occupy a prominent place in the history of the sculpture of the Renaissance. Luka della Robbia’s hard work, his devotion to art was emphasized by one of his first biographers, D. Vasari: “… completely leaving the jewelry business, he (Luca della Robbia) gave himself up to sculpture and did not do anything else, working with a chisel all day nights And he did it with such diligence that, often feeling at night that his legs were frozen, he, in order not to depart from the drawing, warmed them, shoved them into a basket with chips … “

Luca della Robbia was a younger contemporary of the great Donatello, the founder of the Renaissance sculpture. Before his eyes, the first works of new realistic plastics were created, when Donatello gave samples of perfect statues of a seated and standing person, and then reformed the relief, building it according to the laws of perspective, like a painting. This approach to sculpture gave unlimited possibilities for the study of man and nature.

Almost nothing is known about Luke della Robbia’s youth. It is believed that he studied with the sculptor Nanni di Banco, one of Donatello’s like-minded friends. Obviously, Luca della Robbia early showed his abilities, because already in the early 1430s he was entrusted with the most responsible work – the execution of the cantory (department for singers) in the Cathedral of Santa Maria del Fiore in Florence. At the same time, another cantoria was ordered by Donatello himself.

The cantories are decorated with marble reliefs depicting singing and dancing children. Comparison of reliefs shows how different were the creative views of the sculptors and their approach to the topic. However, both decisions are made in the framework of realistic art. Donatello is dominated by the elements of a swift and mischievous dance. The figures block one another, rushing in a rapid movement in front of the viewer. To create the impression of continuity of their dance, the sculptor divides the reliefs only in thin columns.

On the contrary, Luca della Robbia separates his reliefs from each other with massive pilasters; each of them is conceived as an isolated and complete composition. Heroes of Luke della Robbia sing and play music, putting into music all the fullness of feelings. In one relief, we see two children holding a heavy book of notes. Three others, older, look into the notes over their shoulders. All five sing with undisguised diligence. The lines with which their arms, legs, folds of clothes are outlined echo each other, just as their voices echo each other. By this the sculptor as if conveys to us the harmony of their singing. In another relief, a group of three young singers, also looking at the unfolded notes, attracts attention. Their faces are full of noble harmony. They stand embracing, united by one impulse, and it seems that their singing should be distinguished by the same coherence. The clothes are reminiscent of antique togas – in their flowing lines there is also noticeable inner harmony and musicality.

With all the differences, the reliefs of both Donatello and Luke della Robbia are made with exceptional craftsmanship. If Donatello managed to express the element of selfless dance, then Luca della Robbia conveyed the beauty of the ensemble singing with the help of plastics.

Another relief of Luke della Robbia, made for the campanile (bell tower) of the Florentine cathedral, is also associated with music. This hexagonal relief was created in the late 1430s, in addition to the hundred-year-old reliefs made by Andrea Pisano. The composition of Luke della Robbia depicts an allegory of poetry. It shows Orpheus, reciting poems, accompanying himself on the lute. The relief is slightly damaged from a long stay in the open (it was only recently transferred to the cathedral museum), but even now, in the person of Orpheus, there is a creative impulse in his whole figure. And beside the poet, animals and birds, fascinated by the sounds, froze – lions, boar, wolf, eagle, duck, goose, falcon, heron. Their presence in the relief brings something magical, fabulous.

Most of all, however, Luca della Robbia gained fame thanks to works made in majolica technique. The main materials for Italian sculptors in the 15th century were marble and bronze. Luca della Robbia also worked in both materials, but they were quite expensive and required long processing. They tried to replace them with plaster or terracotta (baked clay), but to no avail. And gypsum and terracotta are short-lived, devoid of beautiful texture. Even the coloring on top could not help here.