The Unknown by Ivan Kramskoy 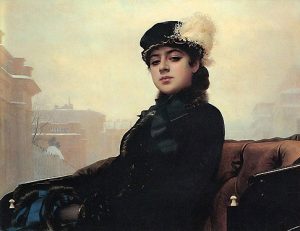 At the end of the 1860s, in the period when the Association of Traveling Art Exhibitions was born, a curious incident occurred in the workshop of Artel of artists. He is described by I. E. Repin in the book “Far near”: “One morning, on Sunday, I came to Kramskoy … From a troika-sleigh that arrived, a group of artel artists-artists with cold frost on fur coats fell into the house beautiful woman I was just dumbfounded by this wondrous face, the height and all proportions of the black-eyed… In the general turmoil, chairs quickly boomed, easels moved, and the general hall quickly turned into a study class. They set the beauty on an elevation … I began to stare at the back of the artists … Finally, I got to Kramskoy. Here it is! That’s her! He was not afraid of the correct proportion of eyes with a face, she has small eyes, Tatar, but how many shine! And the end of the nose with nostrils is wider between the eyes, just like hers, and what a beauty! All this warmth, charm came only from him. Very similar”.

And in November 1883, at the eleventh exhibition of the Partnership, a picture appeared by I. N. Kramskoy depicting a beautiful dark-eyed lady. The canvas is called “Unknown.” Is this a woman that once posed in the house of the artist, it is difficult to say. Time passed, but still the riddle of the work remains unresolved. Who is she, an elegant stranger?

This excited the imagination of viewers of the past and present. The artist hid the name of the beautiful model. She did not know even the closest friends. Someone found similarities with the Petersburg aristocrats, heard the names of the metropolitan princesses, Baroness – the women of their circle were able to so proudly, regally rise in a nifty crew over the crowd. They also remembered famous contemporary actresses.

There was a suggestion about the literary source of the portrait. The image of an unknown person was associated with the heroine of Leo Tolstoy’s novel Anna Karenina. Kramskoy knew the great writer well, he executed two of his portraits, and Tolstoy himself, while working on the novel, captured the features of the painter in the image of the artist Mikhailov. In the last years of his life, the master became interested in the works of F. M. Dostoevsky. Hence the conjecture about the similarity of the portrait image with Nastasya Filippovna, one of the characters in the novel “Idiot”. Even some features of external similarity were found between them: “The eyes are dark, deep, forehead pensive, passionate and arrogant facial expression.”

But the picture became especially popular after the appearance in 1907 of the famous Blok poem, to which it is obliged by the second name “Stranger”. And although it is clear that the poet has created an image that has become an expression of his personal experiences, the lines are in some way echoed by Kramsky’s “Unknown”. Like a vision, “always without satellites, alone, breathing spirits and mists,” it appears in a fluctuating frosty haze and quickly sweeps past the amazed and charmed Petersburgers, stopping their arrogant glance only for a moment. The unknown, leaning back on the leather crew seat, is richly and tastefully dressed: she has a dark blue velvet fur coat trimmed with silver fur and decorated with satin ribbons. An elegant hairstyle is almost hidden by an elegant hat with a white ostrich feather. One hand in a fluffy clutch, the other, with a gleaming gold bracelet, is tucked into a dark kid glove. The lady is inaccessible in her stately beauty, but sheer composure cannot hide the internal energy, passion that is contained in her look and posture.

The silhouette of the figure is a dark, sharp spot drawn on a pink-fawn background, amid the indistinct outlines of the Anichkov Palace emerging in the fog, illuminated by the evening rays of the sun. The architectural landscape occupies an important place in the picture. Although our attention is absorbed by the main character, the urban environment helps us to fully feel the spirituality of the image.

At first glance, the features of the work do not fit in with the previous work of the famous artist-democrat. All his life he defended civic art, condemning evil, violence, lies. Struggling with the routine in life and art, he played a leading role in organizing the association of peredvizhniki masters. The themes of his best canvases are dedicated to people of great spiritual strength, moral purity: “Mina Moiseyev”, “N. A. Nekrasov in the period of “The Last Songs”, “Portrait of I. I. Shishkin”. The most difficult, dramatic moments of life (“Inconsolable grief”) are sealed with psychological insight, and the eternal question of the choice of a person’s way of life (“Christ in the desert”) is touched upon. Everywhere Kramskoy was faithful to his conviction that “without an idea there is no art.”

It is not by chance that immediately after the appearance at the autumn traveling exhibition salon, it would seem that the painting “Unknown” caused a lot of talk. In the depicted woman, only incriminating traits were sought, forgetting to look at the pictorial merits of the canvas. But it was precisely Kramskoy said at the time that the words that “without painting there is no painting alive and striking.” 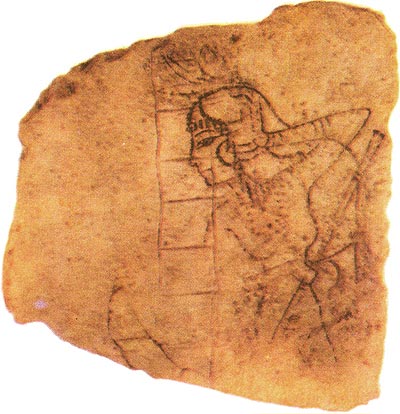