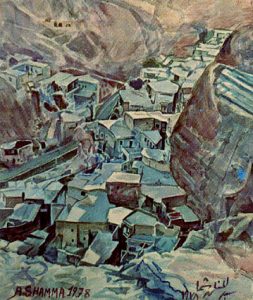 Most of the landscape compositions by Syrian artists are devoted to old Damascus and the village of Maaloula, located in a picturesque mountain area near Damascus. She became a source of inspiration and a place of pilgrimage for Syrian landscape painters. The multi-tiered architecture of rural houses, clinging to the slopes of the mountains and picturesquely piled on top of each other, the romantic landscapes of the surroundings, the fertile valley spreading below, as if embodying the Syrian ideal dream of the beauty of the earth.

The recognized master, professor of the Damascus Academy of Arts, Nasir Shaura, dedicated a series of works to this fabulous corner. Brightness of color solutions, freshness of colors, ease of pictorial reception, a good choice of motifs – all this is typical for works of Shaura. The composition of the landscape “Maalyulya” is built vertically. Cubic volumes of stone houses, growing out of one another, are freely located on the mountainside, blocks of stones in the upper part of the canvas contrast with the image of houses below. Household spontaneity of the landscape gives the figure of a woman leading home ram. Beautifully constructed front and far plans, immersed in a transparent purple shade, between them are the walls of houses, distinguished by a light mass. Loyalty to nature, unique beauty of motive, coloristic richness make this panorama of a mountain village an impressive work of Syrian landscape painting.

In a different way, Maalyulu perceives Luai Kayali in a painting created in 1964. For him, this is a place of life for specific people with their daily worries and anxieties. That is why the multi-tier buildings that occupy the entire space of a small canvas are clearly revealed. The artist draws the attention of the viewer to household items: roughly hewn tables and chairs on the terraces, drying clothes. In another landscape, written later, Kayali seemed to be synthesizing his impressions of visiting the village. It complicates the composition, leading the viewer’s imagination into the depths of a narrow street, resting on the side of a cliff.

Truly, there is no limit to the imagination of artists who appeal to the image of Maaloula, equally beautiful at different times of the year, in the midday heat and late cool evening. Each of the authors tried to create their own image of the village. If Shaury’s landscapes are shrouded in a mist of romanticism, in the works of Kayali there is emotion and a certain drama, then the works of Shalima, a graduate of the Moscow State Art Institute named after V. I. Surikov, captured the everyday life of the village.

Bright decorative solutions using intense contrasts of color distinguish the work of this master. Usually he chooses a deliberately high point of view, as if from the top of a mountain overlooking the surroundings of a village. Squeezed on both sides by mountain ranges, houses of rural residents are piled up. The picture does not show the sky, thus emphasizing the impression of closed space.

Many artists seek to translate into painting characteristic places associated with the legendary history of Damascus. The most common motive is the image of the narrow streets of Damascus with monuments of ancient architecture. At the same time, painters are most often limited to the outside of an attractive urban motive, set decorative tasks, and tend to show pictures of nature, local life, and Arab customs that are exotic to the European eye.

A reflection of this approach was the work of Mamdoukh Kashlan. In “Local Street”, he depicts a typical street of the old district of the city with picturesque quarters and quaint buildings. The cachalo with a tag of observance conveys many of the details typical of old Damascus – wooden window blinds, asymmetrically located windows on the stone walls, consoles, supporting balconies, constantly arches. In some paintings, the author gives a panorama of the Syrian capital with a translucent haze of warm air, hiding the sharp outlines of buildings, reveals the romantic beginning of the city’s appearance.

In the “Damascus” canvas, the artist captured urban neighborhoods, where small residential buildings and merchants’ shops nestled next to the majestic minarets of the Umayyad Mosque. The author emphasizes the architectural originality of the urban motive, in its design resembling Arabic calligraphy with its complicated linear contour rhythm.

The theme of Damascus occupies a leading place in the work of Ezeddin Himmat. His immediate and lively landscapes are individual in their picturesque construction. The smear plays a particularly significant role. That is strong and energetic, then light and soft, it helps to feel the materiality of objects. The master’s works are filled with a feeling of freshness and immediacy of perception, coming from life observations. In landscapes, finely developed color and spatial gradations. The foreground is most often immersed in a transparent, cold shadow.