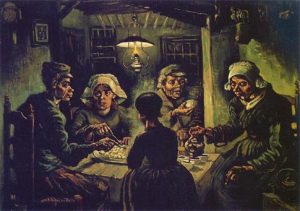 In 1879, when the epidemic of typhoid fever and fever in a multitude mowed people, Borinage’s miners marveled at the young lord, who fearlessly avoided the infected shacks, nursing the sick and maimed. This man was Vincent Van Gogh. Traveling over half of Europe, he ended up as a missionary at the coal mines. When the disaster at the mine was followed by a massive explosion of indignation of the miners, Vincent, their defender, entered into open conflict with the administration. “For almost two years,” he wrote bitterly about this to his brother, “I had to go through something in Borinage that did not look like a pleasure walk.” The unrest of the miners was suppressed, and the obstinate preacher was denied a seat.

Twenty-seven years old, a failed missionary, a teacher and a picture trader begins to learn drawing with an obsession inherent in him in everything. In the first, still awkward sketches, he paints those who sheltered him, their beggarly homes, an inhospitable land. The spiritual revolution brings him the joy of finding a whole world of images. “There is nothing more artistic than loving people” – this commandment will be the core of Vincent van Gogh’s work. But the new habits of a simple intellectual do not like his relatives. The rebellious bitterness of his young art shocks them. This dissatisfaction is shared by influential fellow artists.

So, at the very beginning of the creative search, Vincent Van Gogh was left without any support in the country that created truly innovative painting in the 17th century. But all this is in the past, and now its quieted homeland is a half-asleep province in art. And Vincent had to single-handedly stir up the swell of old prejudices.

He became a special kind of artist – an outcast for the outcast, found the good of freedom of movement, the freedom to wear rags, speak and paint the unadorned truth. An unusual wanderer with a pencil and an album in a traveling bag, spending the night where he would have to, wandered along the roads of Belgium and Holland, occasionally extracting a piece of bread in exchange for his drawings. “I saw interesting things,” he wrote down, “and in the severe ordeals of poverty, I learned to look at everything with different eyes.” The poetry of the road, giving the disturbing joy of discovery, will remain with him until the end.

To the workshop in The Hague, found in 1882 after long wanderings, he treats the same “as the captain of his ship.” All personal with his inherent recklessness Vincent turns into material for art. A lone rebel wants to take in his house a lot of the disadvantaged: “My ideal is to work … with a whole horde of poor people for whom my workshop could serve as a support and refuge.” Having met a woman with a child once in the dank winter in The Hague Street, the beggar artist takes her into the house – makes the first real step towards the realization of the utopia of universal brotherhood.

Wandering over the poor suburbs, he chooses motifs that the masters of his time neglected. But the unrecognized artist melts in the paintings the sad prose of everyday margins into the most inspired poetry, finding it where no one had noticed. Vincent Van Gogh declared: “I see in all nature, for example, in trees, expression and … soul.” He brings this soul even in still lifes, reproducing unassuming objects as if it were a human image. Kitchenware, books or old shoes – things toilers, constant companions of his wanderings – keep the imprint of the difficult fate of the owner.

Having moved from the capital to the backwoods, Vincent Van Gogh began calling himself a peasant artist, following the example of the great Millet. From him he studied the expressiveness of gesture, the ability to find in a working person a new beauty. “To transfer the peasant for his work is … something essentially modern, it is the core of modern art, something that neither the Greeks, nor the Renaissance, nor the old Dutch school did.”

If his life in The Hague took place in drawing classes, then Vincent Van Gogh dedicated painting to his stay in provincial Nuenen since 1884. After a painfully long comprehension of the wisdom of the drawing, he himself is surprised at the speed of mastering the secrets of color. Painting alia prima, the rapid intensity of the stroke will henceforth become the manner of Vincent van Gogh. The theory of the complementary colors of the great experimenter Delacroix became as close to him as Rembrandt’s pioneering light and shadow.

The life-giving task induces the painter to paint the trees in the landscape in such a way “so that you can walk and breathe among them.” He decides more than once on an experiment unprecedented for his time – he simulates trees, squeezing paint straight from the tubes onto a canvas. This achieves a particularly strong effect.

The tonal painting of Vincent Van Gogh is the extraction of amazing subtlety and strength from modest grayish or brownish colors.