“The Battle of San Romano” by Paolo Uccello 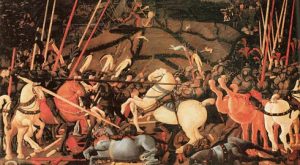 In the famous museums of Europe – the Louvre. Uffizi, the London National Gallery – stored three paintings by Florentine artist Paolo di Dono, nicknamed Uccello. Created in 1456-1457, they were once on the wall of one of the premises of the Medici house. In the inventory of the property of this family it is indicated that the battle of San Romano is represented in the works, in which the Florentines defeated the troops of the city of Siena.

Their customer was a rich banker Cosimo Medici – a man who was the owner of the city, without occupying, however, official positions. Clever and far-sighted, he understood how expensive republican traditions were for the Florentines, knew that any open intervention in politics could end for him sadly, and skillfully directed her through nominees, content with the honorary title of “Father of the Fatherland.” Maybe that’s why his house was decorated with Uccello’s paintings, more relevant in the hall of the republican government – the signoria. Valor Florentine weapons, the idea of ​​protecting his native city – that’s their content. Placed in a private house, they spoke not only about the owner’s loyalty to the ideals of the republic, but also that its prosperity was in many respects his merit.

The Battle of San Romano is one of the last episodes of the struggle of Florence against the Duchy of Milan, on whose side Siena stood. At first, success did not accompany the republic — part of the territory belonging to it was devastated by a detachment of the Syants Several fortresses surrendered to the enemy. The military successes of the enemy prompted the signor to put the famous condottiere Niccolò da Tolentino at the head of the Florentine forces. He led military operations recklessly boldly.

… It happened at dawn on July 1, 1432. The commander with a detachment of twenty horsemen far ahead of the main army and unexpectedly collided with the Sienza in the valley of the Arno, near the fortification of San Romano. The condotier did not surrender to the forces of the enemy, repelled the attack, and fought with his tiny detachment for eight hours, until the Florentine troops approached crossed the river and hit the rear of the Sientes.

Paolo Uccello did not seek to capture all the episodes of the battle. He chose three scenes that seemed the most important. The works themselves speak about this: initially placed side by side on the wall and separated from each other by narrow pilasters, they do not constitute a single narration and nevertheless constitute a single artistic organism.

The first is a picture where the hero of the battle of Niccolò da Tolentino leads the warriors into battle. It is already the height of the battle – on the ground there are fragments of spears, knocked down helmets, a fallen bat. Four knights crossed their arms in front of their leader in a desperate fight, and behind him, to the sounds of pipes, a small detachment of Florentines rushes at the enemy. In the third composition, the soldiers of the main detachment rushed to the aid of them under the leadership of Mikeletto da Cotignola. He is represented in the center with a raised sword, and his army is rebuilt to attack. Personal standards fly over the heads of both Florentine commanders, allowing the viewer to easily identify them. Detachments are moving towards each other. It is not by chance that the second picture shows the culmination of the battle. Here the battle unfolded, but its outcome is clear: in a moment more – and the leader of the enemy will be defeated.

In all three compositions, the action unfolds in the foreground, on a kind of “stage platform”. It is separated by trees from the background, where the figures of spearmen and crossbowmen were lost. Details transferred with amazing accuracy and truth of life. We see the rage of the fighting, grinning faces of horses. Armor flicker dimly. It sounds like the sound of steel, although the action has stopped before our eyes. Nevertheless, the paintings of Uccello are not the exact reproduction of events documented. Their advantage lies in the artistic generalization. There is a place and convention. For example, both condottieres – in ceremonial headgear. By this the artist identifies the winners, while the loser, Bernardino della Carda, has a face hidden under the visor of the helmet.

The image of battles, knight tournaments – not uncommon in the painting of the time. But one feature highlights the paintings of Uccello – the ability to master space, transfer it with the help of perspective. Her laws were discovered in Florence at the beginning of the 15th century, and the painter was among the first to apply them.

The system of linear perspective, according to his contemporaries, gave an ideal projection of the real world onto the plane of the picture. The prospect was understood not just as an artistic device, but as a law common to nature and art. Drawing on it, the artists of the early Renaissance opposed the conditionality of medieval art with the viability /