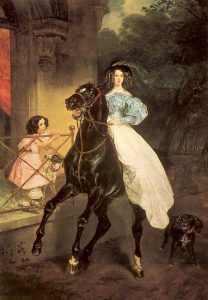 Russian painter Karl Bryullov painted a portrait in real size, depicting a girl on a horse and a girl who looks at her. As far as we remember, we still have not seen a horse portrait, conceived and executed with such art … This portrait shows us a painter who speaks at once, and more importantly, a brilliant painter. ”

Such and other, not less flattering, reviews appeared in the Italian newspapers in 1832. The interest and admiration of art lovers was caused by the painting “The Horsewoman. Portrait of Amatsilii and Dzhovanina Pacini, pupils of the Countess Yu.P. Samoilova ”.

Now the canvas is stored in the State Tretyakov Gallery and still gathers in front of the audience. The artist’s conception happily combined the stateliness of the ceremonial portrait and simplicity, the poetic spirituality of the living, immediate characters of the two heroines.

Few know the history of creation and the fate of the work. The Horsewoman was written in 1832, when Karl Pavlovich Bryullov lived in Milan, in the north of Italy. A close friend of the artist, a wealthy aristocratic Julia Samoilova ordered a portrait of her pupils to a young master. They were the daughter and young relative of the deceased composer Giuseppe Pacini. That same Pacini, whose opera “The Last Day of Pompeii” pushed Briullova on the theme of a famous painting in the future. The painter wrote two sisters in a villa near Milan.

In the center of the picture on a hot racer Jovanina Pacini is depicted. The horse is hot, but the rider sits straight and proud, self-confident. To the left of the young amazon-balcony, on which her younger sister ran, in the depths there is a shady park.

The general silhouette of a horsewoman and a horse forms a semblance of a triangle – a stable, long-favorite form of building a ceremonial portrait. So many compositions were decided by Titian, Velasquez, Rubens, Van Dyck. Under the Brullov brush, the old compositional scheme is interpreted in a new way. The artist enters the picture of the child in the picture. The little girl, hearing the horse’s tramp, rushed out onto the balcony and extended her hand through the bars. And delight, and fear for the rider expresses her face. The note of a living, immediate feeling moderates the cold majesty of the portrait, gives it spontaneity and humanity.

The shaggy dog ​​depicted on the canvas helps to create the impression that in the picture the space unfolds not only in depth, but also exists in front of the characters.

The picture was exhibited in Milan, and then Yu P. Samoilova’s guests could see it among other works of art. In 1838, the famous Russian poet and translator V. A. Zhukovsky admired the portrait.

Further traces of the fabric for a long time lost. Yu. P. Samoilova was impoverished, she moved from Italy to Paris and took with her a portrait of pupils. She broke up with him at the very end of her life, in 1875. Repin, while he was in Paris in the summer of 1874, wrote to P. M. Tretyakov that “some Countess Samoilova sells several items to K. P. Bryullov here …”. But he did not have time to buy a picture.

For the second time the work came to the attention of Russian art collectors at the end of the 19th century. The French art dealer put out the “Horsewoman” or “Amazon”, as she was called, at the Academy of Arts in St. Petersburg. In 1893, P. M. Tretyakov acquired it for his famous collection of Russian painting. Since then, the “Horsewoman” adorns the halls of the gallery.

Today, looking at this work, you understand how the Italian art connoisseur was right when he called the young Karl Bryullov a brilliant artist for only this portrait. The master boldly combines the pink dress of the girl, the velvety black color of the horse’s coat and the white robe of the horsewoman. Bryullov gives a complex harmony of pink-red, bluish-black and white shades. The painter, as it were, deliberately chooses not contiguous, but contrasting, especially difficult in painting, combinations. But each tone is developed masterly in a masterly manner, in a multitude of subtlest gradations. The picturesque layer is not overloaded anywhere, and this enhances the sound of paint on light soil. Bryullov achieved special tonal harmony here. There are no careless, sluggishly written places in the portrait.

When the “Horsewoman” was created, Karl Brullov was thirty-three years old. Ahead was the triumph of “Pompeii”, a series of famous portraits of contemporaries, friendship with Pushkin, Glinka. Ahead was a lifetime …