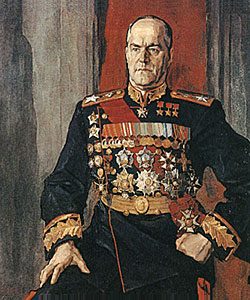 Artists see the world in different ways, each depicting what he sees in his own way, conveying the many colors of nature and unusual characters. And sometimes they dream to express even something abstract: the life of the human spirit. Pavel Dmitrievich Korin sought to “reflect the disobedient, proud spirit of our people.” And he painted landscapes of his native Palekh, portraits of people unknown and famous, never tired of searching in their destinies, manifestations of the “spirit of the people”. Among these works, a special place is occupied by “Portrait of Marshal G. K. Zhukov”. Moreover, even the creation of the canvas is an instructive event.

It began in the years of the Great Patriotic War, when Korin wrote a triptych “Alexander Nevsky”, worthy of taking a place in the museum. But the strength of the impact of the image created by the master turned out to be such that the reproductions of the “Alexander Nevsky” were decorated with front-line dugouts, soldiers’ newspapers. A huge copy of “Alexander”, made by a group of soldiers who stormed the ancient Novgorod, was installed at its entrance. Soldiers went to the west, and the legendary Russian commander called them to fight for freedom. Thus, art, expressing the “spirit of the people”, fought. And here is the year 1945 th. Soviet flag over the Reichstag. In June, Pravda published a photo of our military leaders. Korin cut it out and often looked at it: the idea arose to write a group portrait picture of the “Committee of Defense”. From experience, the artist knew that the idea is embodied only in work from life. So, time to start etudes. In newspapers, magazines, on the radio often told about Marshal Zhukov. On June 12, he was awarded the third Golden Star of the Hero of the Soviet Union, on the 24th he received the Victory Parade on Red Square.

Maybe Korin recalled stories about the storming of the Seelow Heights – the lines of fascist defense on the outskirts of Berlin. Here our command, led by Zhukov, used an amazing tactic: the Nazis knew that Soviet troops usually begin artillery preparation early in the morning, because it is more convenient for infantry and tanks to advance in daylight. And suddenly the darkness of the night was cut by the light of powerful searchlights. Blinded fascists were confused, and our tanks and infantry objects of attack became clearly visible. The enemy was defeated, the Soviet troops suffered minimal losses. About Zhukov’s cunning maneuver spoke a lot. The artist was thinking about the unusual fate of the commander, who passed the way from a student in a skorneatsky workshop to a famous marshal. Probably, there were other thoughts and thoughts, but the conclusion suggested itself: to write the first sketch for the film from Georgy Konstantinovich.

In the fall of 1945, the marshal and the artist met in Moscow. “Is two or three sessions likely enough for you?” Asked Zhukov. “We need at least fifteen, or even twenty to an hour and a half. I take my business very seriously, just like you do mine. ”

In Moscow, Zhukov could not pose – urgent matters demanded his presence in the Berlin grouping of troops. But civilians in Germany have not yet been allowed, and the marshal ordered to put the artist in the uniform of the captain. On the morning of October 16, Korin flew to Berlin. A day later, the letter said: “Tomorrow at 12 o’clock the first session.” The last took place in the winter, in December.

From the very first sketches, the author persistently sought a portrait composition. The drawing made on October 19 is remarkable: Zhukov sits, frankly posing. In the subsequent drawings, Korin emphasized those movements of the figure that deprive her of her compulsive relaxation when posing.

There was not enough time allotted for work in the improvised workshop. The artist painted a marshal wherever he could meet. Once adjutant Georgy Konstantinovich gave Korin a photo – Zhukov and Rokossovsky receive a foreign delegation. With a photograph, the painter went to a ceremonial meeting dedicated to the anniversary of October. Zhukov was sitting on the podium. It’s time to paint! But there was no notebook in my pocket. And the sketch was made on the back of the photo …

Compiling, the author took into account the peculiarities of the coloristic construction. Thus, a bright parade uniform, numerous orders, medals demanded an extremely local background, but dynamic, able to withstand a variety of colors.

For a portrait painter, it is important not only to draw a model, but to study much of what affects the character, the way of thinking of the person being portrayed. And Korin, following the natural tradition, walked through ruined Berlin, among the ruins and remnants of fortifications, vividly imagined the recent fiercest fighting, read on the walls and columns of the Reichstag numerous inscriptions made by the victorious soldiers.

Putting the last stroke, Korin showed a portrait of Zhukov. “I like. And the face of the field. Thank you. ”“ What does field mean? ”Asked the artist. “Such as happens on the battlefield,” the marshal replied. Then he took out an official form and wrote to the chairman of the Committee on Arts Affairs: “My portrait … I think it’s done well. It truly reflects reality. ”