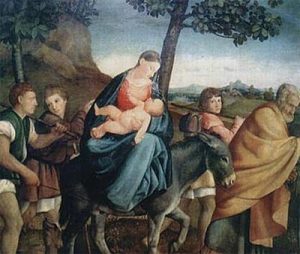 It is enough to remember the names of Giorgione and Titian, Veronese and Tintoretto, and it becomes clear what a bright and beautiful page in the art of the Renaissance was the painting of Venice. In a politically fragmented Italy, each city was an independent state, and its artistic culture had a special character, its own unique features. Historical destinies, social structure, natural conditions, way of life, everyday and cultural traditions determined the originality of the art of a particular center.

Indeed, how could it be like any other art painting of Venice – a fabulous city that arose, as if by magic, among the waters of the Adriatic? “You can re-see all the cities in the world and still come to the amazement, having arrived in Venice,” wrote the French philosopher Montesquieu. The panorama of the city, “soaring like a bird, between water and sky,” the audience saw in a huge engraving, performed by Jacopo de Barbari in 1500. All of Venice is at a glance – sprawling on more than a hundred islands, with countless channels, densely built-up quarters.

Could it not have been the peculiar art of the richest trading state associated with many countries in Europe and the East, who did not spare funds for decorating the city with magnificent palaces and churches? Venice is presented as the most beautiful in the painting by Cesare Vecellio, depicting the center of the city – St. Mark’s Square. In its architecture, various artistic traditions – Eastern and Byzantine, Gothic and Renaissance – were combined in an amazing and organic synthesis. The painting of Vecellio became a kind of exhibition emblem, its prologue. She introduced the audience to the artistic atmosphere, the aesthetic environment in which the art of Venetian painters developed.

They painted paintings for palaces, public buildings and churches, and Venice is often present in their works, no matter what subject the artists turn to. In the scenes “The Introduction of Mary to the Temple” and “The Betrothal of Mary”, written by Vittore Carpaccio, you can find out the motifs of Venetian architecture. The artist narrates in detail and innocently, with that naive purity of feeling, which constitutes the special charm of the art of the early Renaissance.

In a large composition by Giovanni Bellini on the theme “The Annunciation”, the action takes place in a room resembling the interior of the church of Santa Maria dei Miracoli, built in Venice at the end of the 15th century. And the picture itself, consisting of two parts, represents the valves that adorn the organ of this church. Its festive and elegant architecture likens the church interior to a palace hall. Earthly beauty and this scene on the plot of the Gospel legend. The slender, golden-haired Gabriel, walking toward Mary with a swift, easy step, holding a white lily in her hand, is the very embodiment of youth. Nothing conditional, the icon is not in the image of Mary. Light – but not mystical, but warm, sunny – as if entering the picture with the angel, playing in the folds of his attire, surrounds the figure of the Virgin. In the guise of the heroes, in the clear and visible space of the picture, everything breathes in harmony. Rich colors emphasize her joyful character. In the open window you can see the landscape of the Venetian province.

A similar landscape beckoning with fragrant freshness and friendliness with green valleys and hills, mountains that turn blue in the distance, we see in the picture of Tima and Conegliano “The torch and the angel”. The Renaissance epoch as if for the first time revealed the beauty of earthly life, the jewel of each of its phenomena. Heroes quietly reside amidst the peaceful tranquility of nature – leisurely conversations, thoughtfully detached or lost in thought. From this picture emanates a sense of happy consent of man and the world.

Near the serenely contemplative canvas of Chima, the composition “The Holy Family and the Unknown Holy One” by Andrei Mantegna seems harsh, tense in mood. It impresses with the sculptural plasticity of figures, chased precision linear pattern. And, despite its small size, it looks monumental. All the characters are shown in full face, their heads – as in the ancient relief – are depicted on the same level. The lyrical theme here acquires a sublimely strict sound.

The Venetian school included the artistic traditions of those centers that then belonged to the republic. Thus, Mantegna worked in Padua, and his work developed the heroic-monumental style of Florentine art with its pathos of rational knowledge of the world, the cult of plastic form and drawing.

But nevertheless, the true element of Venetian painting is the color that can convey the world in all its splendor and joyful beauty, sensual charm and material diversity, which perfectly corresponded to the secular worldview of the Venetians. The Venetian school is first of all great colorists.