Camille Corot: “I write with my heart” 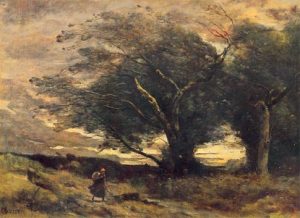 The large, half a century long, creative life of the French artist Camille Corot (1796–1875) was, as it were, subject to the change of seasons. In the winter months he worked in the Paris workshop, often visiting the opera and the conservatory. But the happiness of communicating with wildlife meant for the master incomparably more than visiting museums and concert halls. Every year with the onset of spring, he went on a journey through various regions of France to write sketches. Many of them have become pearls of plein-air painting.

Only in 26 years, the painter was able to follow his vocation. His parents – the respectable Parisian bourgeois, the owners of the fashion shop – did not understand why their son refused to leave the path of the merchant of cloth prepared for him.

For many years, Corot had to endure the neglect of critics and the indifference of the public. In the Salon, where he began to exhibit in 1827, his works were invariably placed in the darkest corners. Corot will later say that he was able to endure trials only because of the unselfish love of nature. No wonder his motto said – “perseverance and integrity.” Particularly fruitful for the formation of a young master was a trip to Italy in 1825–28. He went there after three years of study with V. Bertin, the recognized head of the school of neoclassical landscape. Here, in Italy, then falling into despair from failures, then being filled with self-confidence, Corot rejects established canons and chooses his own way – to follow nature.

Sketches of this time, written carefully, a little student-like, surprise, however, freshness of perception, subtlety of color, filled with air and light. In the work “The Ruins of the Basilica of Constantine and the Colosseum” the composition is based on the rhythmic repetitions of the semicircular arcades of the basilica, occupying the foreground. The young master is attracted by the characteristic. He will always assume that it is preferable for a novice artist to shy away from excessive harshness than lethargy.

In Italy, Corot understood the meaning of an exact drawing, performed a series of sketches with lead pencil and pen. This is not just a study, the main thing here is the image, be it the landscape motifs of the rocks in Civita Castellana or the mountain valley in Papinho. He sketched a diverse Italian crowd. Later, the master will write: “… I decided to start with the transfer of the most common volumes. In the blink of an eye, I threw the first group I got. If there was not enough time, then at least I managed to grab a general character. ”

Enthusiasm did not leave the artist and on his return home. The first of the painters Corot began working on the banks of the Seine in Paris. He discovered the Fontainebleau forest, which was almost never visited by Parisians in those years, with centuries-old oaks and hornbeams, with sandy quarries, somewhat reminiscent of the landscapes of Italy. The etudes of this time show how the zorok and the observant eye of the painter. However, in paintings with views of Fontainebleau prepared for

Salon, the master refers to the well-established schemes of building a landscape – so it will be more than once. And at the same time in the etudes of cypress trees in Villeneuve-les-Avignon the master gives a bold compositional solution, Cutting off their crowns with the edge of the canvas.

Coro visited Italy again twice – in the 30s and 40s. But with the passage of time, the artist was striving less and less to the south, and the north-western seaboard, rural areas and the old cities of Ильle-de-France, the historical center of France, began to attract him.

He writes works at different times of the day – in the morning, when the fog has not yet cleared, and the outlines of objects are fuzzy, at dusk, when the first stars light up in the sky. The master works a lot on the transmission of the atmosphere trembling, the effects of sunlight on clear and cloudy days. Feeling subtly the changes taking place in the natural world, he perceived them almost as states of the human soul. He set the task to convey his feelings to the viewer: “If we are really moved, the sincerity of our experience is passed on to others.”

How did his painting style change? If at the beginning of his career, Corot considered it appropriate to write a sketch in parts, striving for maximum completeness, now he is working on the whole canvas at once. The artist is in no hurry to go to the details, first of all – “the masses and character of the picture.” In the failed places, Corot scraped paint to write again in a la prima manner. He did not make up in advance, as it was then, mixtures of the desired colors, but prepared them in the process. Any brush stroke, the touch of a brush — whether the corot writes a characteristic bend in the trunk or foliage — become an important means of artistic expression. Sometimes, on the damp side, he painted the stalks of dried grass, branches of dead wood by cutting the brush.