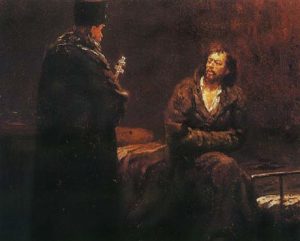 The man was brought to execution. After several months of imprisonment, he was pale. Around the roaring crowd.

– Villain, crazy! In the king himself shot!
– God saved his majesty!

The simple women, with their hands on their cheek, with their eyes full of tears, looked at the young man who lived to the last minute.

And the rebellious youth, who hates autocracy, clutched their fists powerlessly and made fiery oaths in their souls: to finish the Karakozov case to the end!

The 22-year-old artist looked at the 25-year-old “criminal” with particular attention from the crowd. He noticed everything: huge gray eyes, devoid of any shine, from which life seemed to have gone, and tightly compressed lips. Here, in the crowd, he did not guess to draw Karakozov or did not dare. But when he came home, he took a sheet of white paper, with quick and clear strokes, he sketched a portrait of the condemned man and signed it: “Karakozov (by impression), 1866.” And signed – I. Repin.

Ilya Repin was 17 years old when serfdom was abolished. As a boy, he could see sold and purchased serfs exchanged for a stallion or a purebred dog. Could read ads: “Sold a well-trained girl, suitable for embroidery, sewing and weaving lace.” Now the peasants were “liberated”, but at the same time robbed. Only five years passed, and the revolutionary D. Karakozov shot Tsar Alexander II, the “blessed” one …

Repin wrote people turned into cattle, barge haulers pulling barges along the river. Dared to write the Russian tsar, who killed his own son. Reflecting on the history of his country, he portrayed the Cossacks, who “throughout life” remained free. He lovingly and carefully created portraits of the raging Vladimir Stasov, the great Leo Tolstoy and the leader of the Itinerants, Ivan Kramskoy.

More than once Repin returned to two themes that troubled the soul: the church and its disastrous role in Russian society, the image of a man who defiantly challenged it and the autocracy.

Creating a portrait of the protodeacon in 1877, Repin himself described it like this: “… he is all flesh and blood, pop-eyed, shed and roaring, a meaningless roar, but solemn and strong, like the rite itself in most cases.” He wrote a sketch of the painting “The Icon of the Day”, where the men fought for the right to carry the icon, and a stick was raised directly above the “holy” face for a fierce blow. In the painting “The Procession of the Cross in the Kursk Province” he remained faithful to this subject: the fattened lady carrying the icon is protected by the Sotsky with a dull face. The village headman drives off the stick in the center of the procession with a stick. And a mob of an equestrian constable, with the whole span of the battering defenseless, who helplessly obstruct their hands above their heads, rises above the crowd …

The artist is attracted by the images of those who are fighting against the “outrageous reality”. Here is the study “On the Dirty Road” – a revolutionary in a prison gown is being carried by two gendarmes with swords naked. Or the picture “The arrest of the propagandist.” But “Gathering” – the lamp illuminates a circle of the assembled youth, the speaker in the red shirt has just finished speaking. And finally, the famous painting “We did not wait”, where a person is shown who has returned from exile. The thin, tormented by grief, look each other in the eyes of the long-suffering mother and former convict-son …

And again these two big themes are intertwined in one small film “Denial of Confession”. Two people remained in the chamber, face to face: the priest sentenced to execution and who had come to accept the deathbed confession. The last possibility of forgiveness before a terrible and inevitable violent death. Before us is dying and remaining to live. But the roles have changed: his strong conviction, the courage turns out to be the one who dies at dawn, and the weak, pitiful – the one who brought consolation.

Under the picture the years of its creation are written – 1879–1885. For six years she stood on the easel of the artist. For six years he was thinking about her. There remained drawings, according to which we can guess how the artist’s thought developed, how the images of a priest and a revolutionary changed in his mind. The time when the first presentiment of the picture appeared is known for sure. It was the year 1879. V. Stasov brought Repin the first issue of the illegal journal Narodnaya Volya. The poem “The Last Confession” by the poet N. Minsky was published here. The last confession occurs. But the priest meets not humility, but pride, not a broken thirst for struggle, but the highest uplift of spirit, before which even his own destiny seems petty, but great is one popular affair.

God forgive the poor and hungry
I am hot as brothers loved
That I, being born a slave between slaves,
Among the slaves – free dying!

Through the years, Stasov recalled how they read these lines: “I remember how you and I, a dozen years ago, read Confession, and how we rushed about, as if stung and almost deadly impressed. Everything else without such a “sting” is a lie, nonsense and pretense in art. ”

For six years, Repin was looking for a painting composition and finally found it: the priest turned his back on us, the suicide bomber was sitting on the bed, his hands deep in the sleeves of the prisoner’s robe.