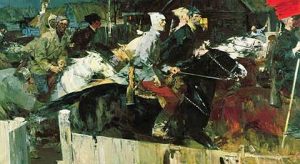 “Our roots are in childhood memories, in the family, its moral soil, foundations, relations with the outside world …”, says Moiseenko. “… From the first impressions of life comes the feeling of the Motherland: what sky was above you, what rains washed, on what earth you set foot from the threshold of your home …”.

The events that determined the path of the artist were exciting changes, difficult struggle, renewed life, the romance of the feat, born of Great October. The father of the future painter, a poor Belarusian peasant, died shortly before his son was born. The family did not have a shred of land, and in front of it threatened a beggarly existence. But the Great October Socialist Revolution took place, the civil war began, and everything changed drastically.

The most vivid childhood memory of the artist is associated with Porfiry Naumovich, his beloved grandfather, who painstakingly affixed Lenin’s portrait in a bright, “red” corner of the village hut. Another recollection of childhood years is the day when a detachment of red horsemen in Budenovka with a red banner in front raced through the village. “As if a ray from an unfamiliar free world burst into our rather deaf places, heralding the beginning of a new life …”, recalls Yevsey Evseevich. ““ … And it really began just a few months after the appearance of the Red Army detachment: a school and an educational program opened in the village. I taught the letters with my mother, who would have lived illiterate if it were not for the Soviet government. ”

The new government gave people bread and letters, brought freedom and happiness, breathed into the boy’s heart the desire to preserve the great changes of the era for the future. And he saved them in his memory, made them the property of the people. Millions of viewers have seen and know the wonderful paintings of Moiseenko, dedicated to the courageous people of the revolution, the heroes of the civil war.

The best picture of the cycle – the “Red Came” canvas — is characterized by the monumental blending of silhouettes, the sharpness of the coloristic solution. The feeling of uncontrollable movement, skillfully underlined by composition, is striking. Movement is not only part of the plot action in the canvas, but a sign of the psychological state of the characters. This is not a mechanical movement of horsemen, not just the entry into the village of a detachment of red cavalry, but the very movement of history, the rapid pace of time. The author again and again passes the vivid facts of his biography through a magic crystal of memory. “What is a painting?” Asks Moiseenko. And the answer: – “This is the life of a particular event in the assessment of the artist.”

The master interprets the strongest impressions of childhood, not trying to portray specific episodes of revolutionary history, to embody the images of famous personalities. He seeks to convey the very spirit of the glorious era, the heroic atmosphere that excites us in songs, documents, photographs, newsreels of those years. But the artist uses the invaluable material of personal observations. That is why his picture is so authentic, so powerfully and reverently imbued with the sounds and colors of an exciting event that fit into a short line: “The Reds have come.”

A squadron inflamed by a recent battle rushes along a narrow village street — faces harsh but enlightened by the consciousness of victory, a whirlwind from under the hooves, the sound of horseshoes, the snoring of horses. And in the distance – in the background of the picture – we see a figure of a boy in a light shirt darting forward. He stands on the porch of his house and with delight looks at the dusty horsemen rushing past. The artist portrayed himself as a boy, to whom the legendary Red Army men on goggled horses seemed giants at that time.

The impressive power of the picture, the truth of the experiences of the little hero are based on the absolute knowledge of life, people of those distant years. The artist portrays the Red Army men – recent plowmen and artisans – with convincing accuracy of individual portrait characteristics and a general integral image of a combat detachment, ardent like-minded people, and a rapid “iron stream”. And as far as well-versed, the author is perfectly truthful in depicting horses! And this is not only in the painting “The Reds Come,” but also in many other canvases.

The love of nature, of all living things, laid down from childhood, is driven by the painter’s brush when he mentally observes the horses flying along the village street. Again Yevsey Evseevich remembers the wise grandfather, his kindness, endless respect for people, the earth, nature: “I can not imagine my grandfather throwing broken glass or a piece of iron on the ground, so that he should not break a branch from a tree. I remember how he, a strong man, wept when they beat a horse. He was organically, vitally connected with nature. ”

The boy in the depths of the painting “The Reds Came” is the heir and keeper of high popular morality. Therefore, his image is so closely intertwined with the thoughts and concerns of today. The artist combines the past and the present in the picture, the character of a silent witness and the author’s personality. It is he himself – our contemporary, behind whose shoulders the battles of World War II, the militia, captivity, concentration camp, liberation.