Fritz Kremer: “I had the good fortune to create many monuments that stand on the street” 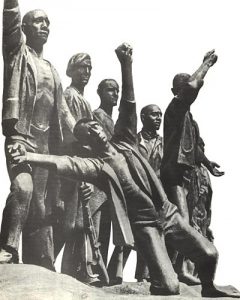 The essence of understanding of the creative tasks of Kremer is to appeal to the broad masses of the people. “I feel it my duty,” says the artist, “to speak about the events that I experienced as a participant or a witness.” Fritz Kremer’s path more than once led him to the brink, the transition of which required risking his life. His art speaks of the most tragic and sorrowful moments in the history of the 20th century courageously, simply and frankly. The artist does not lose faith in the bright forces of man and does not allow falsehood and emotion.

Fritz Kremer was born 80 years ago in the small mining town of Ruhr. He was not one year old when he lost his father, and at the age of 16 after his mother died, he left the burgher’s stepfather’s house that was alien to him. The young man seizes stone-cutting craft, attends evening courses at the Art Museum in Essen, learns from the beautiful German master Wilhelm Gerstel. Kremer’s art developed under the influence of the great tradition of realistic sculpture. He felt himself to be the successor of the Romanesque and Gothic plastics, to the harsh bitterness of the realism of Ernst Barlach and Kate Kolvits, seeing in them truly national features. Since 1926, Kremer is a member of the Union of Communist Youth. In 1929, he moved to Berlin, where he became a student of the Higher School of Fine and Applied Arts. In the same year, marked by the fierce battles of the Communists against the growing forces of fascism, he joined the Communist Party of Germany. The coming to power of the fascists did not change the beliefs of the artist. In 1933, he collected signatures of protest against the exclusion of Kate Kolvits from the Prussian Academy of Arts.

In 1941, Kremer was mobilized into the army, serving in Greece, until the opportunity arises in 1944 to surrender to the Yugoslav partisans. Since 1946, the artist lives in Vienna, returns to creative work. The first of his post-war works is the Freedom Fighter monument for the Austrian concentration camp sector in Auschwitz. In 1950, Kremer was elected a full member of the Academy of Arts of the GDR, moved to Berlin, where he became the head of the sculpture workshop. In 1951, he participated in the competition for the construction of a memorial ensemble in Buchenwald.

The sculptural group created by Kremer is the culmination of the architectural and plastic ensemble. The ensemble includes the authentic burial places of concentration camp prisoners, the Stele Road, on which reliefs and poems by I. Bekher tell the story of seven years of the camp, the Road of Nations, where the Eternal Flame of Convictions of Different Nationalities Perished in the Camp, is Burned, and to the bell tower. The Buchenwald alarm bell is distributed over a cast-iron plate, where ashes are kept from the burned by the fascists Lidice, Oradour …

The group created by Kremer is visible all the way from the entrance gate. It seems as if it turns and grows as it moves towards the bell tower, and when you go up to the Square of Demonstrations, it grows right in front of you. Although the figures are not so large that a person feels depressed in front of them: their height is about four meters. At the same time, due to the precisely found size, dense modeling of the volume, a special sensation of scale and significance arises.

The plot of the sculptural group Kremer chose an uprising of prisoners – a genuine event that occurred on April 11, 1945 and put an end to Buchenwald. The author portrayed the drama of events: the death and the call to battle, the steadfast determination of some and the confusion of others. This revealed Kremer’s realist comprehension of life in the confrontation of forces, the exposure of tragic contradictions and the bright life-affirming belief that man is the master of his own destiny. These qualities, sounded so vigorously in the Buchenwald Monument, marked a new stage in the development of the socialist culture of the GDR. The severe language of Kremer’s plastics with its utmost clarity and certainty in the interpretation of volume, clarity of movements, and stinginess of gestures seem to be devoid of “epithets” and “additions”. It seems that the sculptor was afraid to offend the memory of those who died by the slightest affectation of feelings or the intentional pathos.

Kremer’s meeting with Brecht in 1936 in England, where the poet was in exile, turned the life and aesthetic ideas of a young artist upside down. The best among the portraits created by Kremer is the bronze head of Brecht, begun during the poet’s lifetime, but completed after his death. The features of this wise, ironic, beautiful person with high spirituality were given by Kremer to the look of Galileo in the statue “But still she turns” for the Congress hall in Karl-Marx-Stadt. This image is inspired by Brecht’s play The Life of Galilee.