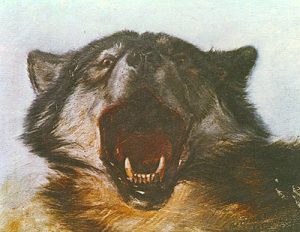 Eighty-six years of life – a considerable time. Exactly so many wonderful Canadian writer, artist, naturalist Ernest Seton-Thompson lived. But who was he in the first place? A rare case – all three professions were happily combined in it.

Seton-Thompson was born in England in 1860, from childhood he dreamed of becoming a naturalist. However, the parents had other plans for this. Naturalist … “Is this a profession?” – Father argued. And he decided: the son will certainly have to become an artist, especially since the boy really has an extraordinary ability to draw.

In 1866, the family moved to Canada. Here, from the neighbor-artist Seton-Thompson, receives initial knowledge of painting. He remembered forever his first oil painting, a portrait of a hawk. The boy spent two weeks on his performance, carefully writing out all the details. School drawings Thompson favorably differed from the work of their peers. Already in his youth he depicts animals, as a rule, from nature. His drawings were interesting, but they didn’t stand out much.

After working two years after school as a student at a young and successful artist in Toronto, Ernest begins attending evening classes at the Toronto College of Art and ends up with his first student. To continue his artistic education, Seton-Thompson went to London, where in 1880 he entered the School of Painting and Sculpture at the Royal Academy, hitting the competition among the six scholars of a hundred applicants.

The student card, engraved, by the way, on ivory, gave a number of privileges, including a free visit to the zoo. There, the future artist, writer and naturalist will spend many days getting to know his inhabitants, drawing a lot from nature. Unfortunately, in a year for health reasons he will be forced to leave London and return home.

In the mid-eighties, Thompson began writing stories about animals, but only writing. Nobody prints them yet. In the autumn of 1890, he entered an art school in Paris, attending evening classes. And in the afternoon … In the afternoon, as in London, he disappears in the zoo, drawing his favorite animals. How many of them did he depict? No one has answered this question yet. But it is known that a folder with three thousand drawings is kept in his house today! Written and a lot of pictures. Seton-Thompson illustrates all his stories with his own drawings, placing them in the margins of pages in a multitude.

“Wolves have always been the favorite theme of my drawings,” admits the writer. Indeed, he had a particular passion for wolves. He dedicated four independent big stories: “Lobo” (the author’s favorite wolf), “The Winnipeg Wolf”, “Badland Billy, or the Winning Wolf” and “Tito. The history of the meadow wolf. Each of the stories is richly illustrated with drawings and reproductions of paintings.

During Thompson’s visit to the Paris Zoo in 1890, one of the wolves caught his attention – a large, beautiful beast from which he painted the Sleeping Wolf. She was introduced to the Grand Art Salon of Paris. The picture was taken.

One day, standing near his work at the Salon, the author heard from a casual visitor a story about how in the Pyrenean mountains near the southern border of France wolves tore to pieces a hunter who lived in a secluded hut and was hunting for wolves. Seton-Thompson is planning to write a picture on this topic.

Having performed it on a 1.4×2.1 meter canvas, he calls the new work “Revenge of the Wolves”, but one of his French friends suggested another name: “Waiting for nothing”, explaining that it more closely matches the meaning of the tragedy. A fragment of the canvas you see in the illustration. True, there is no view of the house in the background, from the chimney of which there is smoke, probably in the house someone is really waiting for the unfortunate hunter to return. This time, the Salon jury rejected the picture, noting that it “insults human dignity”, and “the author apparently sympathizes with the wolf.”

Later, Thompson decided to show a picture at the International Exhibition in Chicago. And again she was rejected. But the press received a letter from the chairman of the Canadian section of the exhibition, which said: “We, unfortunately, have enough sugary, less expressive daub, and I personally would like to see a bold, courageous style of writing – just like in the film“ Waiting for nothing ” . A scandal broke out. As a result, the canvas took one of the central places in the exposition of the Canadian section.