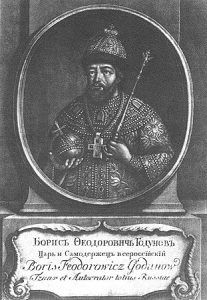 In the middle of the 18th century, the interest of the Russian society in national history increased. Ivan Shtenglin, a master from Augsburg, Germany, who worked in Russia, completed from 1742 to 1780 a series of engraved portraits of Russian tsars. Among them are the images of Boris Godunov and Vasily Shuisky, the images of which subsequently attracted the attention of Pushkin.

Shtenglin worked in the black style used in those years, or mezzotint. This technique is based on the creation of a special rough board, with which the roughness is smoothed out in those places where more or less light details should be on the engraving. This allows you to transmit light and shadow with an extraordinary richness of transitions. At the same time, the number of prints from the board when using black manners is small, and the work itself is laborious and laborious.

Shtenglin made his prints, apparently, from some portraits that had not reached our time, or rather, parsun, who combined methods of icon painting and secular painting. The very black manner very well suited for this kind of images, evoking memories of darkened boards from time, of faded colors and gilding. In the guise of Godunov and Shuisky, there is still a lot of icon painting, ideal, but still there is an attempt to create a portrait in the modern sense of the word.

Both portraits are the same in composition, decorated with lush frames in the Baroque style and are accompanied by a detailed listing of royal titles in Russian and Latin. The engraver focused all his attention on his face. It is as if snatched by a ray of light from the general dark background of the engraving.

The face of Godunov is gloomy, it reflected a complex play of passions. The original appearance of the king was transmitted – among his ancestors there were Tatars. 47-year-old Boris, who, according to the chronicles, was “majestic in beauty, imperative, meaning fast and deep.” But, added an impartial chronicler, “Boris had no virtues at all.” The face of this man was surprisingly successful for the engraver. It seems that in him you recognize Godunov as he appears in Pushkin, for example, in the words of Shuisky:
Yesterday’s slave, Tatar, son of Malyuta,
The son-in-law of the executioner himself is the executioner in the soul,
Take the crown and bars of Monomakh …

Boris is depicted just in the royal vestments, in the cap of Monomakh. Outwardly, he is confident in his abilities, but it is really outwardly. You believe Pushkin – once this person with a groan says: “Oh, you are heavy, Monomakh’s hat!” The right hand confidently holds the symbol of royal power – the power, and only involuntary sluggishness of the left hand with a scepter reveals the inner uncertainty of the king, who still needs to establish himself in the rank monarch in front of people and god. He holds the scepter with his four fingers, and with his little finger, as if for a talisman, touches a heavy breast cross. In the tragedy of Pushkin, Godunov justifies his right to the throne by placing himself in the line of “kings of law, appointed, elected publicly, crowned by the great patriarch …”. But how many terrible cases, executions, blood for this right to the throne? Involuntarily, the hand of Boris reaches for the saving cross.

In the same manner, with the same attributes of royal power, another temporary ruler of Russia is depicted – Vasily Shuisky. In his guise more idealization. If Boris Godunov, at least with his outward appearance, answered the people’s ideas about the king, then the bald one, with small weak-eyed eyes, a red nose and a liquid beard, Shuisky did not look like a fabulously chronicled monarch. The unknown author of the portrait, from which Shtenglin made the engraving, had to work hard so that a light-eyed, strict man with an iconic pious face appeared before the viewer. Only carefully considering the engraving, you can catch the unpleasant, hard folds in the corners of the lips. There is in this person also a determination that makes us remember the scene from “Boris Godunov”, when in the tsarist Duma Shuisky was not afraid to give a voice when solving a complex issue. Boyars are talking to each other, and one tells the other:
I – I confess – did not dare to raise the eyes,
I did not dare to breathe, not only to move …
His interlocutor answers:
And Prince Shuisky rescued. Well done!

The engraving is no longer a prince, but a sovereign king. In a different way than Godunov, he holds a scepter: with determination, characteristic of his nature, Shuisky squeezed him tightly in his fist.

No matter how strong and sure Godunov and Shuisky are, both of them have a sad fate: the first is sudden death among the boyar turmoil and the collapse of all ambitious designs, the second is exile, death in a foreign land and shameful burial “at the crossroads”. Undoubtedly, working on the images of the two temporal rulers of Russia, Shtenglin knew their historical fates, and this could not but affect his attitude to the artistic material.